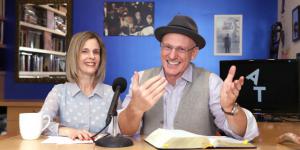 Sal and wife Nina on set of Sal’s live show, AT Daily!

“We're honored to include Sal of Accidental Talmudist into our BoLAA family.” ~Aurora DeRose

The “Best of Los Angeles Award” community was formed four years ago and consists of over 6,700 professional members living and working in Southern California. It celebrates the best people, places and things in Los Angeles with a slogan “No Ads. No B.S. Only the Best.”

“The mission of the community is to celebrate the best of Los Angeles, and allow its community members to connect with other members who share the highest standards of quality and integrity,” expresses DeRose. "We're honored to include Sal Litvak of Accidental Talmudist into our BoLAA family."

Sal's journey began when a minor miracle propelled him into 7 years of Talmud study. When Sal entered the Mitzvah Store on Pico Blvd to buy a gift, he noticed the volumes of Talmud. Lacking any formal Jewish learning beyond my bar mitzvah, he was intimidated by the Talmud, which occupies as much shelf space as three Encyclopedia Britannicas. On that particular day, however, Sal thought, "What am I so scared of? They're just books. I studied English at Harvard and law at NYU. Surely there’s a Book One of the Talmud – I'll just get that and see what it's like."

Sal found the first book, Berachos, and took it to the counter. The kid at the register told him, "You're doing Daf Yomi?", to which Sal replied, "What's Daf Yomi?"After receiving a puzzled look, Sal thought, "Oh man, I bet I’m not allowed to read this book. You probably have to be a rabbi just to touch it. Maybe you need special permission to buy one. I must look like such an ignoramus." The kid replied by saying, "Daf Yomi is a worldwide program for reading the whole Talmud. Everyone reads one page a day on the same schedule. It takes seven and a half years to complete, and today… is day one." The enormity of the coincidence sank in Sal. "Uh, I'll take it." Many people start Daf Yomi. Few finish. It takes about an hour a day, everyday, for seven and a half years.

In 2012, Sal attended the Siyum HaShas at Giants (MetLife) Stadium in NJ, along with 93,000 Jews to celebrate the completion of the Talmud cycle. At this event, Sal could not help but think of Nazi stadiums, where they burned books and chanted death to their people. "Nazis murdered my grandfather at Dachau. He never met my mother – an infant survivor carried by her mother through Terezin." The Nazis are long gone and there we were, 93,000 strong, celebrating the accomplishment of a much smaller number of Talmudists – the ones who completed Daf Yomi that night. "I was one of them – the Accidental Talmudist."

Sal Litvak, the Accidental Talmudist, and his wife Nina now share Jewish wisdom, humor, and music with over a million followers on Facebook. They also produce a weekly live show seen in over 70 countries. Their mission is simple; increase the peace by sharing Jewish wisdom with everybody! Along with the several articles, videos, photos, and readings on Jewish wisdom, you can also view Sal’s live show, AT Daily!, based on the Daf Yomi cycle of Talmud study. The cycle began on January 5, 2020, and with God’s help, Sal will cover crucial highlights from each day’s page for seven and a half years!