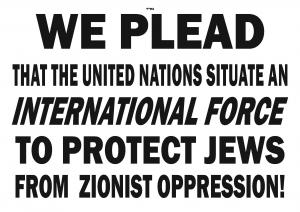 Protesting brutal imprisonment of Rabbi Binyamin Friedman in Israeli prison, whom they have held so far for 12 weeks with no release date in sight.

This brutal treatment of Friedman was due to his history of activism against the [Israeli] state. This is a part of the Israeli regime’s ongoing oppression of our anti-Zionist communities”
— Rabbi Hershel Klar

NEW YORK CITY, NY, USA, June 22, 2020 /EINPresswire.com/ — The Orthodox Jewish community plans to hold a public demonstration this Tuesday, June 23, at 3 PM outside the Israeli Consulate in Manhattan (Second Avenue between 42nd and 43rd Streets) to protest the Israeli government’s ongoing oppression of the anti-Zionist community in the Holy Land. The most recent example is the brutal imprisonment of Rabbi Binyamin Friedman, whom they have held so far for 12 weeks with no release date in sight.
Protesters will then march to the United Nations headquarters, on the steps of the Dag Hammarskjöld Plaza, 47th Street at the corner of 2nd Ave.
Why was Rabbi Friedman arrested?

“During the Corona-virus pandemic, the Israeli government did not allow people to pray in groups, even in the street with proper social distancing and protection, or as lone individuals inside synagogues. In enforcing social distancing regulations, the government disproportionately targeted the Orthodox community, while in secular cities like Tel Aviv they were lax and allowed buses to operate while packed with passengers,” explained Rabbi Hershel Klar, the organizer of the rally.

On March 30, 2020, in one of the frequent police raids in Beis Shemesh, they arrested Rabbi Friedman for his attendance at a ad hoc prayer group outdoors. They gave him an unusually long sentence, saying they would hold him until the end of the judicial process. Additionally, they tortured him in jail in a shocking and horrific manner, as he recently described in an interview.

This is not the first time Friedman has been arrested and harassed, and certainly not the first time that anti-Zionist activists in general have been tortured by the police. The community believes that it’s no coincidence that its members are regularly treated this way.

“The community believes that this brutal treatment of Friedman was due to his history of activism against the state. This is a part of the Israeli regime’s ongoing oppression of our anti-Zionist communities,” said Rabbi Klar.

At the same time, a religious Jewish girl, Hadassah Margulies, was dragged out of her bed in the middle of the night and thrown into military prison for evading the draft. This is not the first time that they have persecuted boys and girls for refusing to join the immoral Zionist army.

The Israelis’ vicious treatment of a Rabbi, and in general their ongoing oppression of the authentic religious community, shows that they are not a Jewish state as they claim to be. Their goal is and has always been to uproot Torah observance. Their very sovereignty is forbidden by the Torah, which teaches that Jews may not have their own state. They act in the name of Jewry and fight against their neighbors, which is against the Jewish religion and thereby causing anti-Semitism in the Middle East and throughout the world. And now the world can see that they not only cause anti-Semitism – they themselves persecute Jews.

“Their state is not a help or benefit to Jews; it is nothing but a movement that seeks to transform Judaism from a religion into a nationalism, destroying the old Jewish people in the process. Their state has existed for 72 years and they are frustrated that we, the original Jewish people, still continue to exist and thrive. They see us as an obstacle to their goals.

“The world must know: they are not a Jewish state! They don’t represent the Jewish people!” concluded Rabbi Klar.

Protesters plan to stand in front of the Israeli consulate and condemn the state for its persecution of the Jewish faith, and the harassment of the religious community.

Afterwards, they plan to ask the UN and the global community to speak out for their community’s rights. The traditional Jewish community in the Holy Land never recognized the state, and under international law as a minority group living under an oppressive regime, they have the right to freedom of religion and expression.

Anti-Zionist Rabbi tortured in Israeli prison – facebook.com/IsraelVsJudaism/posts/692670524903270/
Letter of support to detained rabbi in Israeli prison – israelversusjudaism.org/post/2017/07/11/letter-of-support-to-detained-rabbi-in-israeli-prison
A Hero’s Welcome for a True Hero of the Anti-Zionist Camp – israelversusjudaism.org/post/2017/08/25/a-hero-s-welcome-for-a-true-hero-of-the-anti-zionist-camp
Urgent appeal of Jerusalem Rabbis to the United Nations – youtube.com/watch?v=uq8PDtVx6sA
Historic Visit by a Delegation of Rabbis to the UN Office in Jerusalem – facebook.com/IsraelVsJudaism/videos/1236848296497465/