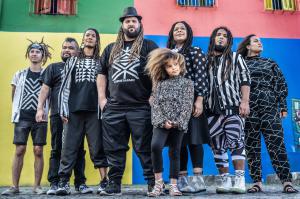 The reggae cover of the worship hit features a global cast of over 80 performers, each recording their own performances for inclusion in the new single & video.

I can’t remember such a polarizing time in recent history, so we decided to do a video that shows what connects us and can truly bring us together.”
— Mark Mohr

LOS ANGLS, CA, USA, September 10, 2020 /INPresswire.com/ — Chart-topping Reggae pioneers CHRISTAARI have released “The Blessing (Reggae Version) featuring The World” — a reggae cover of the worship hit from Kari Jobe, Cody Carnes and levation Worship, that swept the nation earlier this year and has inspired numerous cover versions around the globe. Unlike the other versions, CHRISTAARI assembled a global cast of over 80 performers from all over the world, each recording their own vocal and video performances for inclusion in the new single and music video.

"In the 31-year history of Christafari, no project has been so extensive,” says Christafari’s founder and frontman, Mark Mohr. "But as you can see by this video that prominently features so many others – It’s not about us. This project included contributions from over 80 people including more than 50 singers and instrumentalists from every inhabited continent and numerous nations, islands, states, and territories!"

Mohr spent 23 days alone, selecting, comping, and editing the vocals from a multitude of takes and submissions. His goal was not to pick the most popular artists, but the most diverse. Adds Mohr, "We set out to release something that represented the world, not just our little corner of it."

"We wanted musical genre and production to transcend the typical western uniform sound of worship that we are so used to hearing this song performed in,” explains Mohr. "The end result has ast Indians singing over tablas and sitars, and Brazilians singing over a berimbau. It is a cultural cornucopia of sounds and languages."

"I can’t remember such a polarizing time in recent history, so we decided to do a video that shows what connects us and can truly bring us together,” says Mohr. "With cancel culture at an all-time high, we believe that there is no better time to share this poignant message than now. As racial, social, political, and spiritual issues are instantly turning friends into enemies, we need to spread some love like an old school chain letter from one mailbox to the next to as many as possible."

"We need to stop cursing and start blessing,” says Mohr. "We hope that this video will be a great way to begin this dialogue."

CHRISTAARI will resume touring this fall with the “Your House Tour”, with pandemic-friendly backyard party events planned throughout the United States including stops in Kansas, Missouri, California, and more. or booking information, email booking@christafari.com.

ABOUT CHRISTAARI: The band was founded in Los Angeles, CA by Mark Mohr in 1989. Avion Blackman joined as vocalist and bassist in 2003 shortly after she met Mohr in her home country of Trinidad and Tobago. CHRISTAARI continues to be a dominating force in world music, with six albums debuting at #1 on the Billboard Reggae Albums Chart since 2012. After three decades, the Reggae pioneers are the all-time top-selling Gospel Reggae act worldwide. The legendary group has performed in 46 states, over 85 nations, at two Olympic Games, and at a Presidential Inauguration in Washington, D.C. The band has performed at most major Reggae and Gospel/CCM festivals with the top artists in the genres, and they’ve had the privilege of performing at many of the country’s most prestigious venues such as L.A.’s Greek Theater, Dodger Stadium, and the steps of the United States Capitol before a crowd of 500,000. The band has been featured on The 700 Club, CNN, MTV, MTV Brazil, ABC, TBN, JUC TV, BT, TBS, and many more. Their music is even featured in the current curriculum taught at Carnegie Hall. The band's popular YouTube channel receives millions of views monthly and continues to grow.