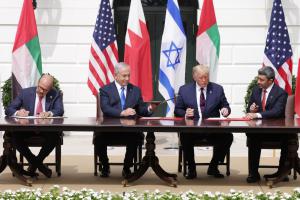 WASHINGTON, DC, USA, September 17, 2020 /EINPresswire.com/ — The American Mideast Coalition for Democracy applauds the historic peace agreement between Israel and the UAE and Bahrain signed September 15 at the White House. President Trump has courageously broken free from the paralysis that has gripped US policy in the Middle East for the last 25 years or more.

As more moderate Middle Eastern states join the Abraham Accords, the strategic re-alignment of Arab states, Israel and the United States will undoubtedly bring peace and stability to the entire region and this will be a blessing to the whole world.

“A new generation, which rejects the tired clichés of the past, is rising,” said AMCD co-Chair Tom Harb. “They want a future grounded in reality, with the promise of a full and prosperous life. They want an end to the terror and death offered by Hamas and Hezbollah. The young generation is embracing life.”

“We hope the day comes soon when the people of Lebanon and Iran will also enjoy the fruits of peace and prosperity,” added AMCD co-Chair John Hajjar. “Once the despicable mullahs and their proxies across the region are defeated, that day will surely come.”

“The mullahs of Iran, who recently thought of themselves as the vanguard of the struggle to dominate the world, now find themselves isolated and increasingly impoverished,” continued AMCD vice-Chair, Hossein Khorram. “The region is no longer buying what they’re selling and that is great news for world peace.”

AMCD extends hearty congratulations to President Donald J. Trump, Secretary Mike Pompeo, Mr. Jared Kushner, President Benjamin Netanyahu, Crown Prince Mohammed bin Zayed, Emir Hamad bin Isa Al Khalifa, Foreign Minister Abdullatif Al Zayani, Foreign Minister Abdullah bin Zayed and all those who worked tirelessly for this historic agreement over the past four years. We especially extend our congratulations to our advisor, Dr. Walid Phares, whose counsel as foreign policy advisor for the Trump campaign in 2016 and constant support for the framework in meetings with Arab leaders and on Arab media helped to lay the groundwork for this monumental agreement.