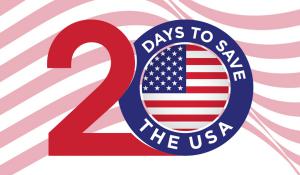 20 Days to Save The USA logo

HICKORY, NC, UNITED STATES, October 16, 2020 /EINPresswire.com/ — Countdown to election day: The virtual conference “20 Days to Save The USA,” ended its first day that, according to event organizer Jerry McGlothlin, was a rousing success.

Said McGlothlin, “Today our speakers included Rick Gates, Deputy Campaign Manager for the 2016 Trump for President campaign, who addressed the gross double standard of how the news media treats Trump vs. Biden, and how even when the shocking news was revealed of the wrongdoing of Joe Biden and his son Hunter, it was met with a collective yawn by most liberal sycophants in national news.
Linda Seger spoke about how Jesus rode a donkey and that many Christians still vote Democrat.

Singer/songwriter John Raymond led the group in a rousing round of his song, “I Pledge Allegiance.”
Floyd Brown, the man who ran the famous Willie Brown negative ad campaign against Michael Dukakis, was featured with a panel opining that the Senate Confirmation Hearings are not required by the U.S. Constitution and that the Republican majority should just put through the confirmation.

And former Bill Clinton chief political strategist Dick Morris, received hearty belly laughs. When asked how to save the USA, Dick Morris answered, “The first piece of advice is not to elect a senile, babbling fool as President who could hardly finish a sentence.”

Friday’s session is Day 2 in the 20 day countdown to election day focuses on how we cannot trust the polls, as well as the Biden and Trump Town Hall broadcasts, where ABC’s Stephanopoulos threw softball questions to Biden and NBC’s Savannah Guthrie played the shrew, doing her level best to gut and filet the sitting President without even a thimble full of respect for the man or the office.

Also being featured Friday is AOC’s congressional opponent, John Cummings who will make a case for how The Green New Deal would bankrupt the USA.

Emergency room physician Mark Bruce will caution voters about the dangers of Socialized medicine, while Lt. General Jerry Boykin will bestow his logic to the crowds, hungry for his battlefield wisdom that also can be applied to the political war, whose victor will largely determine if we are to remain a Republic, or surrender to Socialism and cultural Marxism.

Then Black conservative Charles Butler, Obama’s former neighbor in Chicago, will explain that Black Lives do matter, but that the group, “Black Lives Matter” does not matter and does not properly represent the Black community.

Sizzle Reel for 20 Days to Save The USA