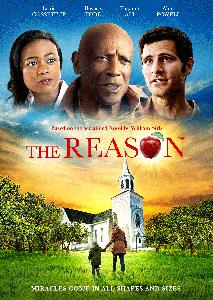 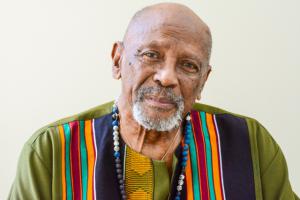 The performances turned in by Lou Gossett Jr., Tatyana Ali, and Alan Powell, among our other ensemble cast members are wonderful, dramatically emotional, and powerfully significant,”
— Matt Shapria , Producer The Reason

LOS ANGELES, CA, USA, October 21, 2020 /EINPresswire.com/ — A heartwarming drama about family, faith and hope based on William Sirls’ award-winning and acclaimed book THE REASON is available to own on Digital, DVD, and On Demand Dec 15th 2020 from Pure Flix Entertainment and Universal Home Entertainment, starring Oscar-winner Lou Gossett Jr., Tatyana Ali, Alan Powell , Kelly Carlson, Beverly Todd, and Burgess Jenkins, The powerful film is centered around a small town stricken with a crisis – a plight that unearths a timeless and probing question : Where is God when bad things happen?

A mysterious man appears in a small town, unexplained miracles start to occur, changing the lives of everyone he meets. There’s a mother who 5 year- old boy has leukemia , two doctors- one a atheist haunted by his past , the other a brilliant young oncologist who places all of her hope in the power of modern medicine – and a blind pastor’s son who hasn’t spoken a single word in 38 years. All of them will brought together by the presence of this stranger, who teaches them the true meaning of faith and hope .

“The performances turned in by Lou Gossett Jr., Tatyana Ali, and Alan Powell, among our other ensemble cast members are wonderful, dramatically emotional, and powerfully significant,” said Matt Shapira producer of THE REASON, “I am incredibly grateful and proud of the film ‘The Reason’ and the finished product, and hope movie goers are as affected as I have been when they watch this film."

Executive Producers Ken and Cindy Sirls of Faith Film Inc. added, “We are thrilled to have this film picked up by Pure Flix Entertainment and Universal Pictures Home Entertainment. THE REASON is in great hands and we cannot wait for movie fans to be able to see this amazing story .”

THE REASON features an original song titled “Rest In You”, written by songwriter and music director Jessica Sirls about finding rest in God.

ABOUT FAITH FILMS INC.: Faith Films, Inc. was formed in 2016 with the goal of creating films that are first and foremost, exciting, and entertaining. Ken Sirls, president of the production company wanted to fill in what he saw as a void in entertainment that is trying to express messages or certain values. That void was that only too often, they simply were not enjoyable or entertaining. Faith Films will focus on stories that draw the audience in and viewing the events through the eyes of a variety of characters that we hope all viewers can find one or more that they relate to. From there, we try to throw in some action, laughs and themes with unexpected twists to hopefully have the audience talking about their experience long after the show is over.
ABOUT UNIVERSAL PICTURES HOME ENTERTAINMENT: Universal Pictures Home Entertainment (UPHE – www.uphe.com) is a unit of Universal Filmed Entertainment Group (UFEG). UFEG produces, acquires, markets and distributes filmed entertainment worldwide in various media formats for theatrical, home entertainment, television and other distribution platforms, as well as consumer products, interactive gaming and live entertainment. The global division includes Universal Pictures, Focus Features, Universal Pictures Home Entertainment, Universal Brand Development, Fandango, DreamWorks Animation Film and Television and Awesomeness. UFEG is part of NBCUniversal, one of the world’s leading media and entertainment companies in the development, production and marketing of entertainment, news and information to a global audience. NBCUniversal owns and operates a valuable portfolio of news and entertainment networks, a premier motion picture company, significant television production operations, a leading television stations group, world-renowned theme parks and a suite of leading Internet-based businesses. NBCUniversal is a subsidiary of Comcast Corporation.

About Pure Flix Entertainment: Founded in 2005, and led by partners Michael Scott, David A.R. White, Elizabeth Travis, Alysoun Wolfe and Jim Ameduri, PureFlix is the leading independent faith and family studio in the world. Its recent releases include: the GOD’S NOT DEAD franchise, THE CASE FOR CHRIST, DO YOU BELIEVE? WOODLAWN, and SAME KIND OF DIFFERENT AS ME. With offices in Los Angeles and Scottsdale, Pure Flix has produced, acquired, marketed and distributed over 100 faith and family-friendly films. Aligned with their vision to influence the global culture for Christ through media, Pure Flix is the industry leader in creating high-quality inspirational feature film content. The studio’s official website is Pureflixstudio.com. Pure Flix also features a leading streaming video on demand service, with thousands of movies, originals, TV shows and more emphasizing faith, family and fun. For more information, go to www.Pureflix.com.