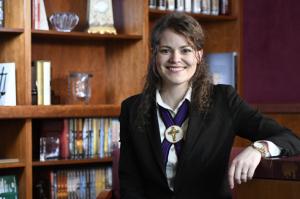 LOS ANGELES, CALIFORNIA, UNITED STATES, October 21, 2020 /EINPresswire.com/ — With more than a million COVID-19-related deaths reported internationally and a second wave of new cases surging throughout Europe, several Scientology ministers took part in an interfaith prayer for peace and the end to the pandemic.

Organized by the Heavenly Culture, World Peace, Restoration of Light (HWPL), the Scientologists joined Hindus, Muslims, Christian denominations and Buddhists in the nearly three-hour program. Participants shared prayers and answered questions posed by those attending online from around the world.

In the question and answer period, Rev. McDuff described the Church's Stay Well campaign which began in March.

Scientology is an applied religious philosophy, and as Scientology ecclesiastical leader Mr. David Miscavige said when he launched the Scientology TV Network, “Scientology is not just something you believe in, it’s something you do.” The Church’s response to the pandemic is a classic example of how it puts the principles of the religion into practice.

Scientology Founder L. Ron Hubbard emphasized the importance of preparedness when he rephrased the well-known maxim, saying “an ounce of prevention is worth a ton of cure.” And the Church took this message to heart.

When the global pandemic was declared, the most effective measures were researched for ensuring the safety of Scientology staff and parishioners, and these were implemented internationally as protocols under the direction of Mr. Miscavige.

Educational materials were created to help people understand not only what to do to protect themselves and their families from the virus, but why. These included illustrated booklets and videos that explain what a virus is, how viruses and germs spread, and why disinfection, social distancing and personal protective equipment like masks and gloves protect people from becoming ill. They also cover how to prevent the spread of disease with isolation. These are available in 21 languages on the Stay Well Prevention Resource Center on the Scientology website, where the booklets may be downloaded free of charge.

Beginning in May, Scientology Churches and Missions across the globe distributed 5 million copies of the booklets in their communities.

Representing the Church of Scientology San Jose, Joey Percival, spoke of the Church’s interfaith work to promote freedom of religion or belief, particularly in countries where this right is denied. He also described the Peace Rides through South Central L.A. and other inner-city neighborhoods to broker peace among warring gangs and combat violent crime. Riders and drivers line up on their motorbikes, souped-up cars and 4-wheelers and drive through the streets in the name of peace. They hand out copies of The Way to Happiness, the common-sense moral code written by Scientology Founder L. Ron Hubbard for use by people of all faiths or none.

From its beginnings, the Church of Scientology has recognized that freedom of religion is a fundamental human right. In a world where conflicts are often traceable to intolerance of others’ religious beliefs and practices, the Church has, for more than 50 years, made the preservation of religious liberty an overriding concern.

Respect the Religious Beliefs of Others