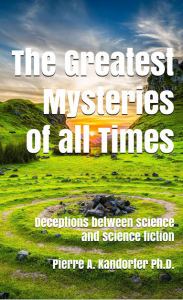 Deceptions between science and science fiction

CALIFORNIA CITY, CA, US, October 22, 2020 /EINPresswire.com/ — The latest book by Pierre A. Kandorfer portrays some of the greatest mysteries of all times. Where did we come from? What is the origin of life? How and when was our universe created?

Charles Darwin’s evolution theory claims that our universe created itself “out of noting.” According to most school books, life was created from dirt, water, and a lot of time through the so-called "primordial soup" around four billion years ago. Secularists want us to believe that everything in our universe is material. Is there any scientific proof of that? Over one century since the introduction of the evolution theory, not a single aspect of the claim has been independently confirmed. Still, our school kids are being spoon-fed with the evolution theory, while the Biblical creationism is outlawed in our education system. At the same time, Darwin’s critics face censorship in our public life.

The supposedly "scientifically provable" evolution, the big bang, and scientific rationalism theories remain twisted. These deceitful theories are defying common sense, logic, and any reliable, methodical proof every honest scientific undertaking relies upon. What is left? Thousands of theories with no proof, confirmation, or logical explanation. They are nothing but the greatest mysteries of all time. Pierre A. Kandorfer analyzes this scientific fraud systematically and investigates the never-ending problem of the evolution claim.

Pierre Kandorfer is a veteran journalist with thirty-five years of a media background. He wrote thousands of articles, hundreds of TV programs, and over a dozen books such as “A Love Letter to America – The secret of the American spirit,” “You Don’t Know Who You Really Are,” “No More Doubt – Science Confirms the Bible,” “Whom Can We Still Trust,” “Fight Back Manual,” “Find Peace of Mind or Lose Your Mind,” in addition to some media textbooks. Pierre’s books are available at NeverGiveUpYourDream.US, Amazon, and many other booksellers.

Pierre taught media communications, acted as Dir. of Programming of a nationwide TV broadcasting, worked as TV host and producer of a movie series, and hundreds of TV shows. He also is a commercial pilot, speaks several languages, and is a proud Christian and passionate Constitutionalist.