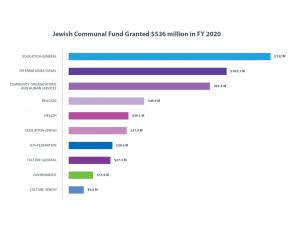 More than 27% of assets distributed to charities in all sectors

Our generous Fundholders stepped up amidst the Coronavirus crisis to distribute funds to charities serving those in need. As needs increased, so did the number and amount of grants JCF distributed.”
— Susan F. Dickman, CEO & Executive Vice President of Jewish Communal Fund

“Our generous Fundholders have stepped up amidst the Coronavirus crisis to distribute funds to charities serving those in need,” said Susan F. Dickman, Executive Vice President and CEO of Jewish Communal Fund. “As the needs have increased, so have the number and amount of grants that JCF is distributing to charities in all sectors.”

A leader in the world of Jewish philanthropy, JCF continues to be the largest and most active Jewish donor advised fund in the country with more than $2 billion in charitable assets under management. In FY 2020, JCF distributed 27 percent of assets, well above the industry average.

While grants were distributed to charities in all sectors, the largest categories of grants by dollar amount were directed to charitable organizations whose missions focused on education, community organizations and human services, and Israel/international—the same top three categories as the previous years.
A donor advised fund at JCF enables Fundholders to organize their charitable giving with ease and tax-efficiency. JCF’s educational events and tools—including a recent webinar series on the benefits of giving through a donor advised fund to meet Coronavirus emergency needs—help Fundholders increase their philanthropic impact. In addition, JCF’s robust investment platform enables fund holders to grow their charitable dollars tax-free, enabling them to give more to their favorite causes.

###
About Jewish Communal Fund
Jewish Communal Fund is one of the largest and most active networks of Jewish funders, currently managing $2 billion in charitable assets for more than 4,100 donor advised funds. JCF's donor advised funds make giving easy, flexible and efficient. The Chronicle of Philanthropy designated JCF a “Top 100” Charity in the U.S. on its Philanthropy 400 list. Learn more about JCF by visiting www.jcfny.org or calling (212) 752-8277. Visit JCF on LinkedIn, like us on Facebook, and follow us on Twitter.