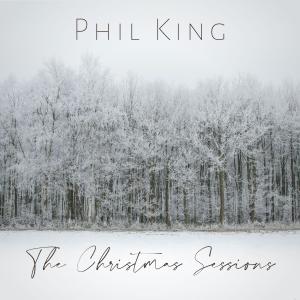 Produced by Grammy award-winning producer, Jonathan Crone, "The Christmas Sessions" encapsulates the joyful energy that is the holiday season while adding fresh elements to your favorite classics. Featuring guitar and harmonica solos from legendary musician and music director, Pat Ferguson, this EP authentically pays homage to the Chet Atkins sound that we all know and love, while still remaining new and current.

About Phil King:
Phil King is a songwriter and worship leader born and raised in a small town in California’s Central Valley. He is currently based at Gateway Church in the Dallas Fort-Worth area as a songwriter in resident and worship leader. Phil has worked alongside many notable acts such as Michael W Smith, Lauren Daigle and Leeland. He has performed in front of a Presidential family as well as many other notable government leaders. His recent song “Not Forgotten” which was written in response to the abortion laws passed in the State of New York in January of 2019 has had a major impact on the Pro Life movement after it was featured on Fox News and many other news media outlets. It has been performed in many places including Times Square at the Alive from New York rally in May of 2019. His latest project, a live worship recording in conjunction with Gateway Church is set to release in February of 2020. Phil is a passionate believer that the arts, when it involves the lifting up of Jesus, has the power and ability to impact culture, shift government and heal society.

About United Alliance Music Group:
United Alliance Music Group (UAMG) is a record label located in Nashville, TN. With over 25 years of experience, UAMG is the home and digital distributor through its Sony/Orchard distribution partnership and physical via New Day Distributors for many award-winning and celebrated established and emerging artists such as Jekalyn Carr, Titus Showers, Bryan Popin, CMT "Music City" cast star Jessica Mack, Joe Pace, Lamar Campbell , and many more. UAMG was launched with the desire to give indie and veteran artists the tools to succeed in the current musical landscape by empowering them with creativity, inspiration, and control.