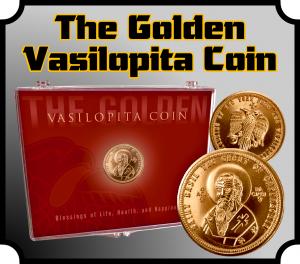 What is a Vasilopita and why is it unique? The answer lies in the direct translation from the Greek, meaning “Basil’s Bread” but with a very interesting twist.

Finding the Gold Coin in your piece of the cake is a lasting life-long Family memory, not only for the Greeks, but for all that practicing gratitude, connecting Thanksgiving, Christmas, and New Year”
— Elias Papadeas

DAYTONA BEACH, FLORIDA, UNITED STATES, November 21, 2020 /EINPresswire.com/ — The Vasilopita is usually celebrated on New Year’s Eve, but in many counties, it takes place on Christmas, and the end result is a beautiful family tradition, the Vasilopita it is actually a very flavorful cake rather than just a bread, it has a very interesting legacy, in that a lucky coin is baked right into it, and everyone knows this, anxiously waiting for that moment of who will find the coin in their piece, known to promise good fortune for the rest of the year.

This year, the traditional “Cutting of the Vasilopita” will be as unusual as the upcoming Thanksgiving holiday, where normally, family and friends get together to celebrate their gratitude. In the age of Covid-19 and social distancing, many are understandably afraid, cautious, and bewildered. But one must think back into the history that has endured the survival of this 1,600-year tradition, where people still celebrated despite famine, disease, conflicts, and other difficult struggles, mainly because the human spirit is thankfully strong and unyielding.

One would think it would be the younger set that would be filled with eagerness, but it is a recognized fact that everyone around the table, regardless of age, shares the same heightened level of anticipation.

According to legend, in the ancient city of Caesarea in 300ad, lived a bishop named Basil, who later became a saint. When his city was under siege by a ruthless tyrant, Basil asked the people to help pay a ransom in order to save their city. The tyrant, humiliated by the total solidarity of the city’s townspeople, finally reversed his position without taking the ransom.

Saint Basil was now faced with the responsibility of how to return the valuables to the people. Facing a conclusion that was seemingly impossible for anyone to know what belonged to whom, he tasked the village bakers to make loaves of bread in which were placed their valuables, but the underlying miracle was that everyone received exactly what they had donated.

The Vasilopita tradition, which continues to this day, is celebrated by Eastern Orthodox people around the world, in the United States, Greece, Eastern Europe, Albania, Bosnia, Bulgaria, Croatia, Kosovo, Montenegro, North Macedonia, Romania, Serbia, and Slovenia, where the family cuts the Vasilopita at midnight on the New Year’s Eve to bless their house and to bring good luck.

The ritual begins with the head of the household, who cuts the Vasilopita, by first making the sign of cross with a knife and then by cutting a piece for the Lord and the Deity, commencing down from their to the eldest to the youngest, and the one who finds the coin inside their piece of cake is considered lucky for the rest of the year.

The Golden Saint Basil Vasilopita coin was designed and minted by Father George L. Papadeas, the first American-Born Greek Orthodox priest in America, for the express purpose of continuing this important tradition for the formative years of youth whom will carry it onto their future families.

Patmos Press is headquartered in Central Florida serving the Eastern Orthodox Community since 1963 exclusively online across the United States and the rest of the world.