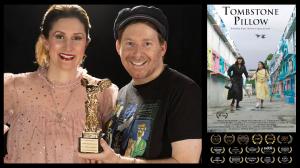 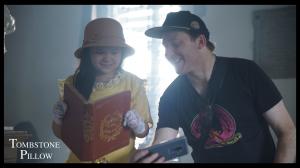 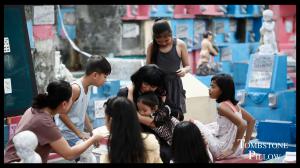 "I think now filmmaking has an even more important role than ever in the uplifting of our society and that is what Tombstone Pillow is all about." -”
— Daniel Lir

LOS ANGELES, CALIFORNIA, USA, November 24, 2020 /EINPresswire.com/ — Husband and wife filmmaking team, Bayou Bennett and Daniel Lir joined together to cultivate their creative outlook. With the establishment of Dream Team Directors, their intentions to inspire through cinema were set in stone. This has led to collaborations with the likes of Oscar nominee Mark Ruffalo, British superstars – Coldplay, and viral sensation Lindsey Stirling. Their work has received a heaping of praise from critics, plus numerous accolades, including two Telly Awards and 27 prizes at film festivals around the world.

Tombstone Pillow is the latest film in their repertoire, and it is positioned as one of their strongest projects yet. The film premiered as an Oscar qualifying entry at the LA Shorts festival, and went on to win Best Drama at the ICP Shorts Series in New York, New York.

In Tombstone Pillow, A 9-year-old girl gives the Philippines wealthiest widow a tour of a graveyard thousands of poor people call home, where she discovers what real riches are.

The film was inspired after a trip to the Philippines, where Bayou and Daniel discovered 6,000 families living amongst the tombs of a Manila cemetery. The conditions were horrible and unendurable, the Dream Team Directors had to bring this to the attention of the masses. So they made a call to one of their past collaborators, Mumbai filmmaker Fraser Scott, to craft an amazing story that would educate the public on the squalor these people were in, and help make better lives for them.

"There are thousands of families living in cemeteries, sleeping on tombs, human beings deserve better, and filmmaking is the most powerful voice we know which has allowed us to help create change and awareness to this problem." – Bayou Bennett

The Tombstone Pillow production was not without its share of challenges. Despite being unable to be on location in order to take care of her three year old child, Bayou wasn’t going to let that get in the way of co-directing the film. So through experimentation with the tools of modern technology, Bayou lent her directing expertise to the production through Facebook Live, providing her input from over 7,000 miles away. The end product is a testament to the unwavering dedication of its cast and crew. And its accumulation of awards and raves is proof of its stunning achievement.

"I think now filmmaking has an even more important role than ever in the uplifting of our society and that is what Tombstone Pillow is all about." –
Daniel Lir

The goal with Tombstone Pillow now is to present the film to the mayor of Manila in an effort to relocate these families to an environment more suitable for human habitation. The Dream Team Directors screened the film in its shooting location of Manila on February 23, 2019, where it was a finalist at the Asian Cinematography Awards. It went on to open at the Dolby Theater during the NYC International Film Festival on March 23, 2019. This was a tremendous fate for an important film meant to trigger great social change.

Tombstone Pillow has garnered 21 nominations and numerous wins throughout its festival tour. Among those, there were awards for:

Sharry Flaherty of Samera Entertainment acquisitioned this short subject documentary for Bounty Films, which is distributing Tombstone Pillow for a wide audience, so as many people as possible can be aware of this heartbreaking way of life.

Tombstone Pillow is free to stream for Amazon Prime members in the United Kingdom. You can check it out by clicking HERE

The honorable mission of Dream Team Directors continues unabated in an ambitious pursuit to promote products and spread public awareness. They are always on the lookout for their next great collaboration. So if you need a powerful way to bring attention to your brand or product so it can both entrance and romance your consumers, be sure to contact Bayou Bennett and Daniel Lir of Dream Team Directors at: www.dreamteamdirectors.com

About Bounty Films:
Bounty Films Is An Australian-Owned Independent Film Distribution Company. Based in Melbourne and complemented by a passionate and dedicated staff who have over 20 years of experience in the entertainment industry, Bounty is committed to releasing films that are both entertaining and culturally significant.