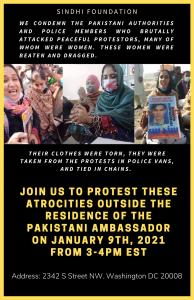 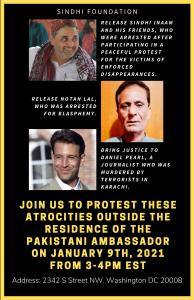 WASHINGTON, DC, USA, January 8, 2021 /EINPresswire.com/ — In recent decades persecuted people have suffered the worst forms of human rights abuses ever witnessed in Pakistan. These violations have been endured by the people of Sindh, Balochistan, and Pakhtunkhwa, who have suffered greatly at the hands of the Pakistani government.

Join us in protest against enforced disappearances, extrajudicial killings, the destruction of Hindu temples, and the forced conversions of Sindhi Hindu girls, murder of Hazara people in Balochistan, arrest of Sindhi Inam and his friends, mistreatment of Sindhi women protesters by police, arrest of Professor Natan Lal on blasphemy charges, and arrest of Pashtun leader Ali Wazir by Sindh police.

Executive Director of Washington based Sindhi Foundation said "It has been more than seven decades and this long dark night of atrocities doesn’t end. It is the responsibility of people with conscience, human rights organizations, and especially United Nations to help us end these atrocities and injustices in Sindh and other regions of Pakistan".