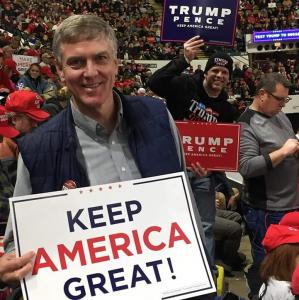 WASHINGTON, D.C., UNITED STATES, March 1, 2021 /EINPresswire.com/ — The Marter for Congress Campaign kicked off its grassroots efforts with attendance at a recent Scott Presler event in Shorewood, Illinois. Presler, a "non-traditional" Republican and recipient of the Ronald Reagan Freedom Award at this year’s CPAC, has become a highly influential activist for expanding GOP voter base and training volunteers.

Marter explains, "While Scott was not there endorsing any specific candidate, we share a lot of the same thinking. The Republicans will not have a big tent by inviting in failed Democrat ideas. That's a betrayal of our base. Instead, Scott and I both believe we'll become that big tent party by inviting in Democrats and Independents who are tired of being ruled by failed Democrat leadership. These are the new Republicans and it's exciting to see those who appear to be unlikely allies, uniting around conservatism. They just needed to know they're welcome."

Another development confirms that grassroots is the winning strategy for the Marter Campaign. A "media darling" has entered the race, risking a split of the conservative vote, Marter confidently points out the disparity between the voters and the D.C. Consultant Class and what he calls the "local media echo chamber."

"While I watched the House Freedom Caucus press conference on the radical Equality Act this week, a supporter of mine was posting on social media, clips from my debates when I ran in IL Congressional District 14. I had a good, informed answer about the Equal Rights Amendment. The person who has now entered this race, didn’t even recognize it by name. This is a major issue that affects a wide swath of conservative positions, from babies in the womb to keeping custody of your children, to who belongs in girls’ sports and the religious freedoms of people of all faiths. We can’t be represented by people who don’t know the issues.”

"Some conservative media outlets will have to do some soul searching about how they assess candidates," says Marter. The working and newly unemployed people of Illinois, no longer look at politics as a sporting event. It's a life and death struggle, literally, and people are very worried about the economy, their safety and their freedoms being taken away. They don't want a movie star or a party-switcher. They want a serious candidate who knows the issues.

A Marter candidacy holds the promise of proactive work to undo the Radical Left agenda and advance conservative principles of freedom, safety, prosperity and unity. Picking someone who "can win" based on ethnicity, gender or money alone is a failed process, says Marter. Instead, we're running on principles that create a rising tide of freedom and opportunity for all. Much like what President Trump did before the pandemic. Those are things that can unite us. They already would have if it weren’t for the liberal media and Democrats working so hard to divide us.

People are exhausted with politics. It's shallow and crooked and that's why it reaps the wrong results. I'm injecting something else, that's neither shallow nor crooked. It's called principled conservatism. Illinois is dead last in a lot of things and it's not because of Republican policies. We don't want to export these things to the federal government any more than we already have and we don’t want to send someone who’ll get eaten in the D.C. Swamp and have no effect. Neither star power nor Adam Kinzinger style, “leftist lite” will accomplish great things for America.

“At some point, We The People must reject the failed methodology of picking candidates and get out and support someone who has the knowledge and fortitude to bring about real change. I'm that candidate and you'll find me at Marter4Congress.us ."

James Marter, a graduate of Purdue University, is a small business owner of a professional ERP software and consulting company, with a national and international practice and 34 years’ experience. He is a life-long Republican and Chairman of the Kendall County, Illinois GOP.

For questions or more information, visit Marter4Congress.us or donate here. To set up interviews with James Marter, call or email his Media Relations Director at: Press@Marter4Congress.US or contact the Campaign at (815) 585-8006.