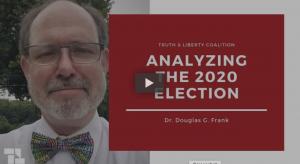 Dr. Douglas G. Frank – a physicist, chemist and mathematician – recently discussed his discoveries while analyzing results of the 2020 presidential vote on a Truth & Liberty Coalition livecast.

Frank has presented his findings in meetings across the nation.

I like to take lots of data, go swimming in it, see if I can find the patterns.”
— Dr. Douglas G. Frank

“I discovered the algorithms that were controlling the election,” said Frank. “To us on the outside watching the election, we see these behaviors and don’t understand them – [but] I can [now] predict them based on what I know is underlying it.”

Having earned a number of advanced science degrees, Frank has worked in the defense industry, published articles in several scientific journals, patented a method for viewing microscopic particles in metal surfaces, and established a school for gifted children. A man of varied interests, Frank brought his expertise to study the 2020 election. His analysis began when he was asked to investigate the contested results of a congressional race in Pennsylvania.

When he began his investigation of the Pennsylvania race, he was able to recognize that voter registration data lined up with results from the U.S. Census in a way that made him curious.

“I like to take lots of data, go swimming in it, see if I can find the patterns,” said Frank.

When Frank charted the number of ballots received by each age, he found an uncanny correlation between that graph and the graph of registered voters and census data. They virtually matched each other, he said.

According to Frank, they also showed unprecedented and nearly impossible voter turnout figures. What’s more, when he examined other counties across Pennsylvania, he found the same correlation and stunning results.

The complexity, precision, and widespread nature of the data correlation across precincts and counties throughout Pennsylvania are beyond the ability of any human being to manually control, Frank concluded.

Upon further study, Frank determined that a precise formula was used to control the election results, and he was able to ultimately derive the actual numerical values that were used in the formula. He said that once he discovered the formula, he was able to predict the exact turnout by age in other counties in Pennsylvania.

“Each county’s registration rolls are artificially inflated,” said Frank. “For example, people who have passed away – you don’t remove them from the registration roll, so that gives you extra voters.”

Frank said that, based on his calculations, he estimated a significant percentage of the votes cast in the 2020 election were actually “phantom votes.” Phantom votes, he said, are legally invalid ballots because they are attributed to people who, for example, died before the election, have moved out of state, already voted, are convicted felons, are underage or who say they did not actually vote. To corroborate his estimate, he assembled a team of canvassers who went door to door in Pennsylvania with a randomly selected list of people who supposedly (according to election results) cast a ballot in the 2020 election. The canvassers found, according to Frank, not about 20% as he initially believed, but over 30% of the ballots cast were from phantom voters.

After studying Pennsylvania, Frank studied Michigan, Wisconsin, Colorado, and other jurisdictions. He finds that the same essential patterns are in every state. And, Franks says, there is significant corroborating evidence of the scheme across the nation. In just one county in Colorado, for example, he said 2,000 votes were attributed to people who had died before the election.

“During the election, they monitor what is happening and insert those ‘phantom ballots’ appropriately as needed,” said Frank of those who could have engineered the election. “And they start with predictions ahead of time, so they have targets they are shooting for.”

Frank has presented his findings in meetings across the nation, sharing evidence with concerned citizens. He has also been featured in a pair of interview documentaries – Scientific Proof and Absolute Interference – hosted by political activist and entrepreneur Mike Lindell.

Learn more about Frank’s research by watching videos at his YouTube channel. He also shares regular updates on social media through Follow the Data with Dr. Frank.

About Andrew Wommack:
Andrew Wommack is president and founder of the Truth & Liberty Coalition, Andrew Wommack Ministries, and Charis Bible College. He and other Christian leaders established the Truth & Liberty Coalition to educate, unify, and mobilize believers in Jesus Christ to affect the reformation of nations through the seven mountains of cultural influence. Since 1968, he has taught God’s Word with clarity and simplicity, emphasizing the unconditional love and grace of God. His vision is to spread the Gospel as far and deep as possible through his daily Gospel Truth television program, broadcast nationally and internationally, as well as through GospelTruth.TV, his internet television network.