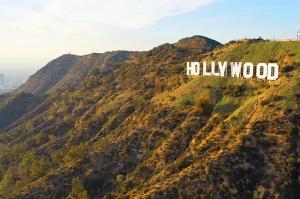 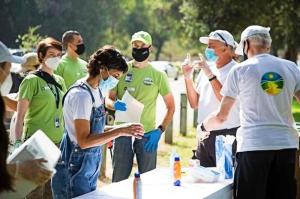 Volunteers gathered near the Los Angeles Zoo to begin the cleanup. 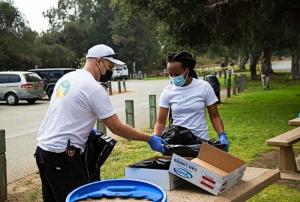 Volunteers picked up supplies and headed out for the cleanup. 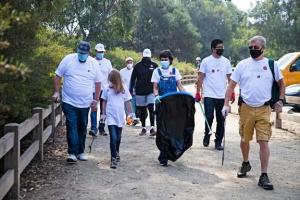 Team sets off to clean up abandoned campsites.

Hollywood Village cleanup targeted debris in Griffith Park to reduce a chance of a wildfire and avoid the kind of damage created by last month’s Palisades Fire.

Last year, drought contributed to California suffering five of the six largest fires in the state’s recorded history. Drought was also a factor in fire season beginning early for the Greater Los Angeles Area this year. The Palisades Fire, which began in Topanga State Park near Santa Monica May 14, burned 1,325 acres and took 12 days to contain. This fire prompted Ralph M. Terrazas, Los Angeles Fire Department Chief, to tell reporters, “I think we really have to think about brush fires as a year-round challenge.”

Before the cleanup, organizers met with Griffith Park Rangers to determine what help they need to reduce the risk of fire in the park. The rangers were most concerned about several abandoned campsites that were full of debris. The Hollywood Village cleanup began at 9 a.m. at the L.A. Zoo Parking Lot on Zoo Drive, where volunteers received cleaning supplies and headed off for these targeted areas.

These cleanups are based on a precept of The Way to Happiness, a common-sense moral code by humanitarian L. Ron Hubbard, in which he stated:

“Care of the planet begins in one’s own front yard. It extends through the area one travels to get to school or work. It covers such places as where one picnics or goes on vacation. The litter which messes up the terrain and water supply, the dead brush which invites fire, these are things one need not contribute to and which, in otherwise idle moments, one can do something about.”

Hollywood Village cleanups are sponsored by a partnership of The Way to Happiness Foundation, the Church of Scientology, and the Los Angeles Police Department.

The founder of the Scientology religion is L. Ron Hubbard, and its ecclesiastical leader is Mr. David Miscavige