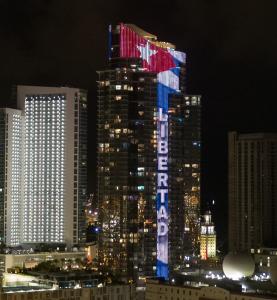 MIAMI, FL, UNITED STATES, July 26, 2021 /EINPresswire.com/ — As a shining signal of solidarity with the protesting people of Cuba and the demonstrators outside the White House, downtown Miami’s 700-foot-tall Paramount Miami Worldcenter skyscraper is lighting-up the “Magic City’s” skyline with the world’s largest electronic Cuban flag and the mammoth messages of “Libertad” and “Freedom.”

The lighting display dates and hours are as follows.

Hours of operation are from 5:00 a.m. until sunrise; and from 8:00 p.m. until midnight. The display ignites at the top of every hour for a duration of two minutes.

The superstructure’s 60-story tall, 300-foot-wide by 100-foot-high rooftop crown, is displaying a white solo star embedded in a red triangle and wafting blue and white stripes.

And, stretching vertically through the building’s 700-foot-tall center column are fluttering blue and white stripes and a massive L.E.D. read-out of the Spanish word, “Libertad” and its English translation, “Freedom.”