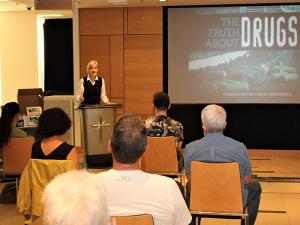 The Church of Scientology Seattle held a drug prevention open house and forum in honor of International Day Against Drug Abuse and Illicit Trafficking. 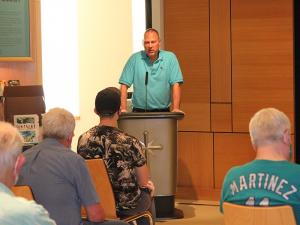 Dave Scattergood, who leads the Truth About Drugs initiative in Washington State, briefed those attending on their drug prevention campaign. 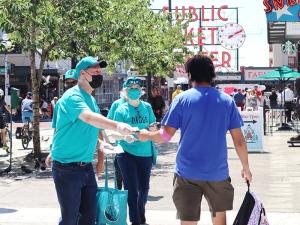 Seattle Scientologists reach out to youth with the truth about drugs. 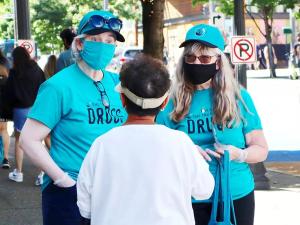 Nearly everyone has a story about how drugs have affected them or their friends or families.

Drug prevention volunteers from the Seattle Church of Scientology renew their commitment to providing the truth about drugs to the youth of Washington.

Drug-Free World volunteers briefed those attending on a report released this month by the Washington State Department of Health, stating:

* Fentanyl-related overdoses are increasing across the state across all age ranges, races, ethnicities, and socioeconomic backgrounds.

* 55 of those who fatally overdosed on fentanyl were under the age of 30.

The forum focused on what people can do to bring this crisis under control. It aligns with the theme of this year’s International Day Against Drug Abuse and Illicit Trafficking: Share Facts on Drugs, Save Lives. According to the UN Office on Drugs and Crime, “For every dollar spent on prevention, at least ten can be saved in future health, social and crime costs.”

“In Washington alone, we’ve put over 300,000 drug education materials into the hands of law enforcement officials, counselors, educators and other professionals and individuals across the state,” Scattergood said. “To help address increasing drug fatalities, we will continue these distribution events throughout the summer with the purpose of reaching as many youth as possible with the unvarnished facts about drugs.”

Foundation for a Drug-Free World provides resources anyone can use to help bring this crisis under control. The Foundation’s Truth About Drugs campaign includes:

These resources are available on the website of Foundation for a Drug-Free World at www.drugfreeworld.org. All audiovisual components can also be accessed through the Scientology Network. Voices for Humanity is a Scientology Network original series that spotlights the work of drug-prevention activists using the Truth About Drugs campaign around the world.

To provide attendees of the July open house practical experience with just how simple it is to take effective action using this campaign, they invited them to join Drug-Free World volunteers in downtown Seattle, where they distributed nearly a thousand booklets that provide factual information about the dangers of drugs.

The Truth About Drugs materials can be ordered in 20 languages free of charge through the Foundation for a Drug-Free World website.

The Church of Scientology International Dissemination and Distribution Center produces all educational materials for Church-sponsored humanitarian programs, including The Truth About Drugs, the world’s largest nongovernmental drug awareness program. The Church makes it possible for Foundation for a Drug-Free World to provide these educational materials free of charge to schools, civic groups, governments, law enforcement and institutions in the private sector.

The Founder of the Scientology religion is L. Ron Hubbard and Mr. David Miscavige is the religion’s ecclesiastical leader.