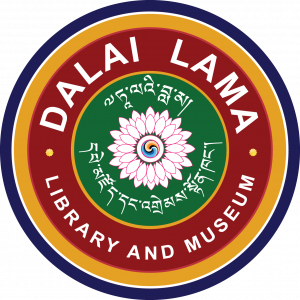 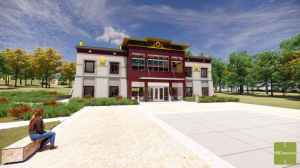 Rendering of the Center’s Exterior

Supported by His Holiness the 14th Dalai Lama, a Public Fundraising Campaign is Underway to Develop a Hub of Compassionate and Humane Education.

If you think you're too small to make a difference, try sleeping with a mosquito.”
— His Holiness the 14th Dalai Lama

ITHACA, NY, UNITED STATES, July 29, 2021 /EINPresswire.com/ — The Dalai Lama is inspiring a movement toward compassion and unity in the U.S., and it will begin in Ithaca, New York.

In a statement made on His Holiness the 14th Dalai Lama's 86th birthday, Namgyal Monastery – the Dalai Lama's personal monastery and North American seat – announced plans to build a Dalai Lama Library and Learning Center on its grounds in Ithaca, New York. The statement detailed the launch of a $5 million public fundraising campaign to support the project, which represents the first phase of a planned development to include the building of a Dalai Lama Museum on the site at a later date. Both projects will be the only facilities of their kind anywhere in the world.

"We are seeking the support of donors for a project of great benefit to all of humanity, the building of His Holiness the 14th Dalai Lama's Library and Learning Center," said Tenzin Choesang, President of Namgyal Monastery in Ithaca. "Our vision – one that is supported and shared by the Dalai Lama – is to encourage genuine human interconnection and unity in an increasingly divided world. The Dalai Lama Library and Learning Center will do this by creating a transformational hub of compassionate and humane education that is open to everyone, both in-person and online."

The Dalai Lama Library and Learning Center will span 9,240 square feet and will serve as a repository for all the works of the current and previous Dalai Lamas, and a place for study and exploration for the public, including students, scholars, spiritual, civic, and business leaders, and practitioners of all faiths. The Learning Center will be a physical space as well as a virtual destination (via its robust website) for people across North America and the world, offering free and low-cost programming such as classes, talks, seminars, meditation, and more.

The Dalai Lama Trust kicked off the fundraising campaign with a $1.3 million donation, and generous donors and members of the public already have donated an additional $1.2 million of the $5 million needed by year's end to bring the Library and Learning Center to fruition. With suggested donation levels starting at $25, there is an opportunity for many to express their support for the project, which will help to:

– Create a center of learning that promotes basic human values to include compassion, forgiveness, tolerance, contentment, and self-discipline regardless of nationality, religion or origin – both in person and online, with a wide array of free and low-cost programming (i.e. meditations, workshops, talks, retreats) accessible to everyone across the world

– Build understanding among different faiths and cultures by fostering dialogue and study in an effort to promote a culture of peace and compassion, therefore impacting social change by considering the collective flourishing impact our actions have on one another

– Extend the work of His Holiness the Dalai Lama by bringing together scientists, philosophers, and practitioners to explore and bridge relationships between contemplative wisdom philosophy and science, particularly the science of the mind and consciousness

– Establish an academic center for the study and preservation of Tibetan Buddhist culture and history with its unique language, people, literature, art forms, architecture and performing arts, and its commitment to protecting our environment's natural resources

"We welcome all types of support – be it funds, time or other resources – from individuals to corporations, foundations and other organizations," said Choesang. "We need the public's help to make this vision of a better and inclusive world where our differences generate curiosity and appreciation for one another a reality."

– Spread the word by sharing the project on social media
– Donate through the website's donation link
– Purchase through AmazonSmile as 0.5% of total purchase will be donated to the project (select Namgyal Monastery Dharma Center as the charity of choice)
– Volunteer by lending skills, talents, and resources
– Partner by donating a portion on a company's product sales proceeds to help fund the project