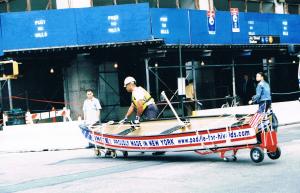 Don Victor Mooney pulls his canoe from downtown Brooklyn to St. Paul’s Chapel as a lasting tribute to the heroes and victims of 9/11. 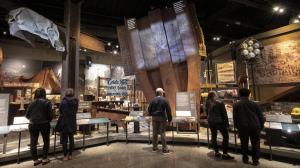 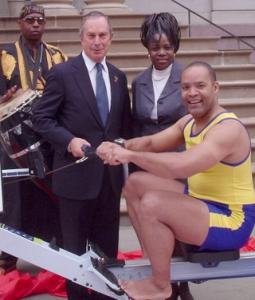 With Mike Bloomberg as Chairmen of National September 11 Memorial & Museum, we’ve an opportunity to share our story”
— Don Victor Mooney

NEW YORK CITY, NEW YORK, UNITED STATES, September 8, 2021 /EINPresswire.com/ — In advance of 20th anniversary of those killed in the 9/11 attacks, Don Victor Mooney, President of H.R. 1242 Resilience Project has written to National September 11 Memorial & Museum seeking their consent to include a canoe used to honor the heroes and victims of September 11 for permanent exhibition.

The canoe was used by Mooney during his 3rd Annual Paddle for HIV/AIDS in the summer of 2002.

During the circumvention of Long Island waters, sand and soil donated by United Nations member states was solemnly released as a gesture of solidarity. Construction & General Building Laborers Local 79, AFL-CIO supplied Mooney with dust from Ground Zero, which joined the tribute.

With a national mood steeped in patriotism at the tragedy of 9/11, designers, retailers and UNITE! labor union joined forces to promote an initiative to support garments produced in the city. Hang tags were made with the insignia: UNITE! Proudly Made in New York. These went on union-made garments in stores throughout the country.

To help the campaign, Mooney wrapped his canoe with the hand tag in vinyl, which resembled the American flag. H.R. 1242 Resilience Project looks to have some garments on display for the exhibit.

The canoe was towed by hand truck and dolly from Brooklyn to St. Paul’s Chapel in Lower Manhattan where it docked as a final tribute. Once an affirming letter is received, a fundraising campaign will be launched to underwrite the exhibit.

Among other things, H.R. 1242 Resilience Project held a prayer vigil on the eve of US Open in memory of Arthur Ashe advocacy for HIV/AIDS. A campaign dubbed Operation Arthur Ashe, a grassroots effort to collect tennis bags, rackets, and balls stuffed with school supplies for children concludes on Sunday.

The bible shares in Ecclesiastes 9:11, the race is not to the swift, nor the battle to the strong, nor bread to the wise, nor riches to the intelligent, nor favor to those with knowledge, but time and chance happen to them all. After nearly twenty years, it's our hope to join others in remembering 9/11, said Mooney.