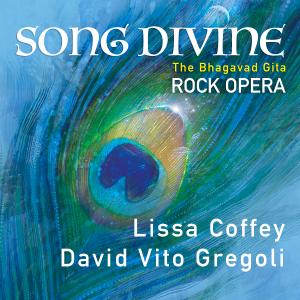 Groundbreaking. Magical. Song Divine is a fusion of the best of east and west – it's Hamilton for the spiritually minded.”
— Ricky Kej, Grammy ® winning composer/artist

LOS ANGELES, CALIFORNIA, US, September 8, 2021 /EINPresswire.com/ — Jesus Christ Superstar and Godspell rocked the world in the 1970s. In 2015 Hamilton turned the Founding Fathers into rap stars. Now, 5,000 years after the Bhagavad Gita first appeared, Krishna and Arjuna have gotten the rock star treatment in a new east-meets-west rock opera.

Best-selling author/songwriter Lissa Coffey and award-winning producer/composer David Vito Gregoli have created Song Divine: The Bhagavad Gita Rock Opera. Based on the iconic text, which is included in the epic Mahabharata, Song Divine is a collection of original songs with a pop/rock vibe infused with Indian instruments and flavor. Each chapter of the Gita is a song, and each song is based on a traditional Indian rag.

This is a double album, with 18 songs and a bonus track, on independent label Dharmapala Records. The first single, “Know Who You Are” will be released on September 10 with a music video across all streaming services. The entire album will be available on all streaming services on October 13. “Pre-Save” options are available now. Direct links are posted at SongDivine.com. Music videos are posted on YouTube.com/coffeytalk

Award-winning popular recording artist Sonu Nigam sings “Know Who You Are,” the song inspired by chapter two of the Bhagavad Gita. Sonu Nigam is called the “Elvis Presley of India.” He was ranked the Number one artist on the US Billboard Uncharted charts twice. He performs live in concert internationally. A celebrity judge and television host on several variety, award and talent competition shows in India, Sonu has millions of fans and followers worldwide. He is a Bollywood favorite, and is widely considered to be an inspiration to new singers in the Bollywood industry.

Lissa Coffey flew to Mumbai, India to work with Sonu Nigam and a team of Indian artists and musicians including producer Upmanyu Bhanot. “Recording with Sonu was an amazing experience,” Lissa says. “Not only is he technically the most gifted vocalist around, he also deeply understands the importance and the devotional intent behind our project. We are beyond grateful to have Sonu’s beautiful expression on Song Divine. I feel like he channeled Krishna through his voice.”

Endorsements
“Groundbreaking. Magical. Song Divine is a fusion of the best of east and west – it’s Hamilton for the spiritually minded.”
-Ricky Kej, Grammy ® winning artist/composer

“An epic story deserves an epic production such as this. Song Divine is a masterful and virtuosic work that will enlighten and entertain for years to come. Lissa Coffey, David Vito Gregoli, and their collaborators are dazzling in their conception and sparkling in their performances.”
-Kabir Sehgal, Multi Grammy® winner/New York Times bestselling author