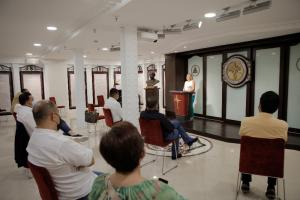 Numerous associations of Madrid have gathered with Scientologists on the occasion of the International Day of Humanitarian Assistance.

a Volunteer Minister helps his fellow man on a volunteer basis by restoring truth and spiritual values to the lives of others. … does not shut his eyes to the pain, evil and injustice of existence”
— L. Ron Hubbard

MADRID, MADRID, SPAIN, September 9, 2021 /EINPresswire.com/ — Numerous Associations of Madrid have gathered in the assembly hall of the Foundation for the Improvement of Life, Culture and Society, on the occasion of the International Day of Humanitarian Assistance, in order to give recognition to those who have been working to protect their communities.

In their speeches, representatives of the various entities thanked the Church of Scientology Volunteer Ministers and the Foundation for the Improvement of Life, Culture and Society (Scientology’s foundation recognized with UN ECOSOC Special Consultative Status since 2019) for the delivery of health protection materials during this pandemic year.

The Foundation collected donations of tens of thousands of masks and sanitizing bottles, channeling their delivery through the Volunteer Ministers and the invited entities, who in turn distributed all this protective material to large families and people most in need in their immediate areas.

The various guest speakers, who have been protagonists in aid actions in the times of Covid, were:

Isabel Ayuso, Board member of the Foundation for the Improvement of Life, Culture and Society, who highlighted the spontaneous creation of a "nervous system" of aid that has made it possible for these donations to reach several thousand citizens in need.

Patricio Farinango, president of the association RAICES DEL ECUADOR, who spoke of the human side of the gratitude, but also the pain, of people who were in such a situation of poverty that they could not even have access to the masks. The distribution took place in his community of Villaverde.

Ivan Lujan, founder of GRUPO QUERER ES PODER, asked the attendees to continue to be prepared to give help anywhere in Spain, but also abroad, considering this event as a meeting to start alliances for the future.

Raúl Nunik, president of ASAMA, ASOCIACION AMIGOS DE LA AMAZONIA, highlighted the personal satisfaction that he transmits to his volunteers after long days of helping his community.

Jose Porras, representative of the HERMANDAD SAN JUAN PABLO II, at the end of the event stressed the need to create a coalition to unite all these wills in projects of need or for emergency situations.

Juan Carlos Mendez, in charge of the VOLUNTEER MINISTERS OF SCIENTOLOGY, stressed the importance of "getting going" when one decides to help, rather than resigning oneself or waiting for help. He also offered to participate in the Volunteer Ministers activity to those present.

Dennis Romero, representative of APLORE, ASOCIACION PROVINCIAL DE LOJANOS RESIDENTES EN ESPAÑA, reminded the attendees that the sanitary emergency with all the problems it has generated and is generating has been for all countries and that the spirit of help has increased in the face of these disastrous situations.

Alexandra Salazar, Secretary of ASOCIACIÓN LOJANOS FRONTERIZOS EN ESPAÑA, has greatly appreciated all those present for their commitment in delivering protection materials to their communities, with a speech the audience took to their hearts.

After that, an improvised dialogue took place and the beginning of what seems to prognosticate a fruitful coalation to help improve society through combined projects oriented towards humanitarian aid.

Enrique Cervera, representative of the Church of Scientology and organiser of the event, expressed his satisfaction with the commitment of all those present, thanking them for their presence and highlighting their work as leaders who are close to their people and who are truly trying to help.

The Church of Scientology and its Volunteer Ministers who played a key role in gathering the needed help and get it organized and distributed over 70.000 euros of protective material and food just in Madrid. In creating the Volunteer Ministers program in the mid-1970s, Scientology Founder L. Ron Hubbard wrote that a Volunteer Minister “helps his fellow man on a volunteer basis by restoring truth and spiritual values to the lives of others. …A Volunteer Minister does not shut his eyes to the pain, evil and injustice of existence. Rather, he is trained to handle these things and help others achieve relief from them and new personal strength as well.”

With the events of the 9/11 terrorist attacks in New York City, Scientology ecclesiastical leader Mr. David Miscavige called on Scientologists to redouble their efforts to aid their fellow man. He issued a directive entitled “The Wake-Up Call,” which has inspired and continues to inspire exponential growth within the Volunteer Minister program all over Europe and the world.