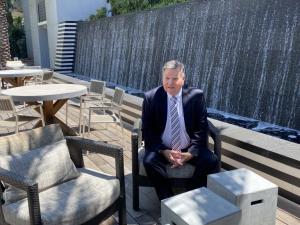 LOS ANGELES, CA, UNITED STATES, September 14, 2021 /EINPresswire.com/ — Sept. 12, 2001: In the worst terrorist attack ever against the United States, hijackers struck at the preeminent symbols of the nation’s wealth and might Tuesday, flying airliners into the World Trade Center and the Pentagon and killing or injuring thousands of people.

Acclaimed bankruptcy attorney, Charles Daff states, "A moment of personal silence and community prayer for the loss of souls from the wanton and malice acts of 9/11. On this 20th anniversary let’s reflect on the loss of life and the living of life for those we mourn and for those of us who survived. Pay no attention to those who caused this tragedy in our remembrance."

College of Law in June 1977 with a Juris Doctorate Degree. He graduated from California State University, Fullerton in June 1974 with a B.A. Degree in Political Science. Charles W. Daff has resided in Orange County, California since 1970 where he attended college, attended law school and currently maintains his practice of law. Charles W. Daff was admitted to the State Bar of California in December 1977. He is admitted to all the state courts in the State of California and all of the United States District Courts in California. In September 1987, he was appointed to the Chapter 7 Trustee Panel by the Office of the United States Trustee, Orange County Office and currently services as a Chapter 7 Panel Trustee in the Riverside Division of the court. He is a member of the State Bar of California, the Orange County Bar Association, (and its Commercial and Bankruptcy Section), National Association of Consumer Bankruptcy Attorneys, Orange County Bankruptcy Forum, Inland Empire Bankruptcy Forum and American Bankruptcy Institute and National Association of Bankruptcy Trustees. He was designated a “Super Lawyer”, an award granted to the top 5% of attorneys in Southern California.